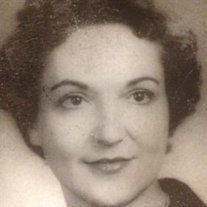 Carol Marie Low April 21, 1925- April 16, 2013Carol was born to Clinton Volz and Anna Grace Johnson on April 21, 1925 in Hobart, Indiana. Carol met Robert Low in high school and they married on January 2, 1943. They moved out to Oregon in 1952 where they made their home and raised their family until they went home to their Lord. Carol was a homemaker, caring for her four children and running the household. She always kept herself busy with volunteering at church and school, singing in the choir, selling Mary Kay products, working part time at fabric stores and collecting fabric from the same stores for sewing projects. Carol enjoyed taking the scenic route always and never minded taking an extra ten minutes to spend with friends or family chatting. She spent hours on her porch swing, being at home in her neighborhood and inviting friendly faces who passed to join her. Her other places of comfort were walking by the Clackamas River and being at the ocean; you would never know she was a girl from Indiana with how much she loved to be at the beach. Carol was also known for painting, mountains and oceans, but also coloring old portraits. She especially loved her family and enjoyed spending time laughing, playing games and being with them. Carol was preceded in death by her siblings Rosemary, Ruth, and Noel, and by her husband Robert James Low II who passed away in September 2004. Carol is survived by her four children: Ron Low, Judy Creager, Bob Low, and Russ Low; her seven grandchildren: Angela Selby, Becky Gradwell, Rick Rawlins, Ron Low, Heidi Low, Kalika Stanton, and Trevor Low; seven great grandchildren: Tyson Manney, Nicholas Gradwell, Conner Gradwell, Braden Gradwell, Jacob Rawlins, Marek Stanton, and Corban Stanton, and one great-great grandchild: Emma Manney. There will be a funeral service held on Monday April 22, 2013 at 11 am followed by a lunch reception at Gladstone Christian Chruch at 305 E. Dartmouth St, Gladstone, Oregon 97027

The family of Carol Marie Low created this Life Tributes page to make it easy to share your memories.

Send flowers to the Low family.