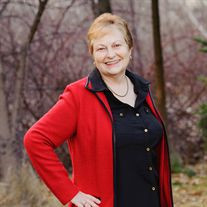 Carol Ann Johnson, age 69, was born on March 19, 1945, in Beach, ND. She was the daughter of George and Victoria Lardy.Carol graduated Sentinel Butte High School in May of 1963. The following month she started attending Billings Business College in Billings, MT. Following her Graduation from BBC, Carol was employed as the financial secretary for the Billings Division of Indian Health.On June 19, 1965 Carol married Edward Terry Blue, of Beach, ND, at Saint Michael's Catholic Church in Sentinel Butte, ND. The couple settled in Livingston, MT for several years before moving with their two sons (Carey-1966 & Dale-1968) to Van Nuys, CA. During their time in California, their daughter (Julie-1970) was born. In the fall of 1973, the family moved to West Linn, OR. Here they had one more son (Shawn-1975). In February of 1982, Terry passed away from brain cancer. Carol was hired in 1982 as a middle school secretary, for the West Linn-Wilsonville School District, working in that position until her retirement in May of 2009.On October 8, 1988 Carol married Marty Johnson of Salem, OR at Saint John the Apostle Catholic Church in Oregon City, OR. They have continued to reside in West Linn, OR for the last twenty-six years. Carol really enjoyed spending her time amongst flowers, which was evident from her yard. She also kept herself busy by donating her time and efforts to help people in need. Carol is survived by her husband, Marty; her brother Donald Lardy (Judy) of Farwell, MN; her two sisters Betty Blue (Daniel) of Milwaukie, OR and Donna Latka (Paul) of Townsend, MT; her three sons Carey Blue (Kris) of Boise, ID, Dale Blue (Melissa) of Tigard, OR and Shawn Blue (Jolene) of Oregon City, OR; her daughter Julie Jasper (Michael) of Reno, NV; seven grandchildren; and two great-grandchildren.A Funeral Mass will be said for Carol on Saturday, November 22, 2014 at 11:00AM at the Resurrection Catholic Parish in Tualatin.

Carol Ann Johnson, age 69, was born on March 19, 1945, in Beach, ND. She was the daughter of George and Victoria Lardy.Carol graduated Sentinel Butte High School in May of 1963. The following month she started attending Billings Business College... View Obituary & Service Information

The family of Carol Ann Johnson created this Life Tributes page to make it easy to share your memories.

Send flowers to the Johnson family.