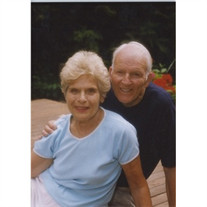 Carol Helen Ellsworth was born July2,1929 in Coos Bay, Oregon and she passed away on Thursday,April 4th,2019 in West Linn, Oregon. Born to George and Emma Burger,Carol was raised in North Bend, Oregon,adjacent to Coos Bay. She attended the public schools and graduated from North Bend High School in 1946,after which she headed to Portland Oregon with her childhood girlfriend Betty Jacobson to attend Portland Business College, learning the ropes to become a legal secretary and office manager.  Upon completion of her degree, she returned to Coos Bay and was hired by local legal firm to manage the front of the firm's practice.   In 1948 she met Russell Boyd Ellsworth at a dance. They courted,were engaged,and married on January 27,1951 in Coos Bay. There they set up their first home.In late 1951,Russell her beloved husband of 57 years, began his 33 year career with the Oregon State Police and they subsequently transferred to Newport, Oregon.  Carol soon began work managing the front office activities for the OSU/Lincoln County Agricultural Extension office. Sons Dirk and Mark were born in Newport in 1960 and 1964. In 1965 Russ began a new assignment with the Oregon State Police and was transferred to the Portland Patrol Office. The family moved to Stafford, Oregon and from there to West Linn in 1969,where Russ and Carol resided for over 52 years. Not long after, Carol began her beloved 15 year career in the West Linn School District as a school secretary at Cedar Oak Park School in the Robinwood neighborhood.Her true heartfelt passion and love each day was being part of both the children's lives as well as helping to manage the daily workflow for teachers and staff. Carol loved the outdoors.   Her long time home in West Linn was like living in the woods. She was an avid gardener, with a never ending love affair for her rhododendrons  and geraniums.  Boating in and around the US and Canadian San Juan Islands as well as camping and traveling were her some of her favored recreations.  Indoors she put her talents and passions to sewing dresses and skirts as well as creating amazing culinary delights in the kitchen.  The summer rituals of canning vegetable and fruits she handpicked at local farmswere an annual event. Carol was an avid reader and was a member of a longtime book club made up of cherished friends.  She played a serious game of pinochle as well, with her equally long card carrying pinochle group. Carol loved being a wife to Russell, an amazing mother to Dirk and Mark, and grandmother to her five grandchildren.  She cultivated deep friendships in the community with many, over her long life.  Carol was a member of West Linn Lutheran Church and active in Stephens Ministry, women's group retreats and bible studies.  Blessed be the memory of Carol Helen Ellsworth. Carol is survived by her sons, Dirk of Tigard; Mark of West Linn; grandchildren Spencer, Hannah, and Grant Ellsworth of Sherwood area; and Mikayla and Juliann Ellsworth of West Linn. The Ellsworth family thanks you for your presence today and all your loving kindnesses offered during Carol's lengthy illness with Alzheimer's disease.  Following this memorial service you are invited to the Fellowship Hall for a catered lunch and reception. An Interment ceremony will be held at Willamette National Cemetery on Friday, May 3rd, 2019 at 1:00pm. A memorial service and day of remembrance will be held on Saturday, May 4th, 2019, at West Linn Lutheran Church at 11:00am.   Memorial gifts may be directed to Susan B. Koman Breast Cancer Foundation or to The National Alzheimer's Association, or to the West Linn Lutheran Church.

Carol Helen Ellsworth was born July2,1929 in Coos Bay, Oregon and she passed away on Thursday,April 4th,2019 in West Linn, Oregon. Born to George and Emma Burger,Carol was raised in North Bend, Oregon,adjacent to Coos Bay. She attended the public... View Obituary & Service Information

The family of Carol Helen Ellsworth created this Life Tributes page to make it easy to share your memories.

Send flowers to the Ellsworth family.