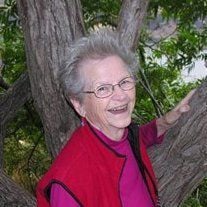 Betty Mae Gardner Farasy PuckettBorn May 9, 1927, in England, Arkansas, Betty Mae Gardner was the seventh of twelve children of Ivy Briggs Gardner and Alvin Gardner. She died July 14, 2013, of causes related to breast cancer at her home in Estacada, Oregon.Betty graduated from England High School before moving to California in 1947. She graduated from beauty school and then worked for the phone company in Los Angeles. In the spring of 1948, she met Earl Oliver Farasy while dancing at the Paladium. They married in September of that year. In 1951, they moved to Portland, Oregon, where she raised her family. She was active in the Altar Society at St. John the Baptist Catholic Church and Christ the King Catholic Church in Milwaukie. She first met Fred A. Puckett, Jr. in 1947, in Pine Bluff, Arkansas. After many years, they reconnected and were married on July 15, 1978, in La Mesa, California. She had a lifelong love of learning and enjoyed music, arts and crafts, reading, writing, genealogy, quilting and, especially, gardening. She will be remembered forever for her love and compassion, grace, kindness, and sense of humor.Betty is survived by her husband, her six children, Christine (Roger) Flynn of Phoenix, Arizona, Richard Farasy of Milwaukie, Margaret (Steve) Ryan of Lead, South Dakota, Anthony Farasy of Estacada, Lisa Peterson of Battle Ground, Washington, and Michelle (Nate) Schwartzberg of West Hills, California, her sister Margo Deems of Salinas, California, grandchildren Dawn Flynn, Elizabeth Weckstein, Nicole (Kevin) Iervolino, Jessie Elizares, Gabe (Colleen) Christian, Caitlin Farasy, Ricky Farasy, Matthew Peterson, Sarah Peterson, Gayle Schwartzberg, and Joshua Schwartzberg, and great-grandchildren Mason, Piper, and Rylee Weckstein and Elijah and Quentin Iervolino. She was preceded in death by her parents, ten of her siblings and granddaughter, Shannon Eckert Flynn. A memorial Mass will be held Friday, July 19 at 11 a.m. at St. Phillip Benizi Catholic Church in Oregon City. Recitation of the Rosary will be at 10:30 a.m. Private interment at Willamette National Cemetery following. Betty would appreciate donations to the Mayo Clinic at www.mayoclinic.org/donate in support of education and research

Betty Mae Gardner Farasy PuckettBorn May 9, 1927, in England, Arkansas, Betty Mae Gardner was the seventh of twelve children of Ivy Briggs Gardner and Alvin Gardner. She died July 14, 2013, of causes related to breast cancer at her home in Estacada,... View Obituary & Service Information

The family of Betty Mae Puckett created this Life Tributes page to make it easy to share your memories.

Send flowers to the Puckett family.