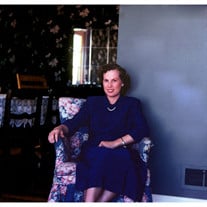 Betty Jane Hanks Misseldine                                                                                                                       November 15, 1927 - December 3, 2020 Betty Jane Hanks was born November 15, 1927, in Tetonia, Idaho, to Emma Wright Hulet and David Capener Hanks. It was a blended family. David had five children from a previous marriage: Harvard David Hanks, George Augustus Hanks, Ephraim Earl Hanks, Ida Mae Hanks, and Theodore Verender Hanks. Emma was a young widow with a small son, Adrian Hulet Cook. Betty Jane was Emma and David's sixth child. Their eight children included: Nancy Davida, Wright Capener, Lincoln Marlow, Clair Sylvanus, David LaWayne, Betty Jane, Emma Louise, and John Phillip Hanks. It is worth noting that the terms half-brother/sister or step-brother/sister were never used. They all regarded each other as brothers and sisters and loved each other dearly. That is a credit to both Emma and David and their children. Tetonia was a very small town in southeastern Idaho. Betty Jane's constant view from her bedroom window or any place on the sheep and dairy ranch was of the beautiful Teton Peaks. Betty Jane's father died of pneumonia on January 4, 1932. She was 4 years old. Her sister Louise was 1 and her mother Emma was expecting a baby boy in June of that year. Betty Jane's brother Adrian Cook set aside his plans for college and, instead, stepped forward to help his mother run the sheep ranch and raise his younger siblings. The next oldest child, Davida, was 16. Wright was 14. Lincoln was 12. Clair was 10, and David was 8. They all had to help. Emma's mother Betsy Hulet, unable to hear or speak, cared for the younger children. Emma cooked meals for the field hands. The boys milked cows and fed animals. Even at his tender age, David tended sheep at the sheep camp in the spring. By spring, even 5 year old Betty had to feed lambs. Oh, how she hated sheep! She said they were the dumbest animals on earth. During these years, her brothers praised Betty Jane for the way she could handle a hay wagon and the horses at harvest time. Betty Jane had a beautiful singing voice and loved participating in school musicals and plays. She attended one semester of college at Brigham Young Academy in Provo, Utah. She did not enjoy that. It was too big and too far away from home. She returned to Tetonia and began working in the county recorder's office in Driggs, Idaho. It was there that she met a handsome highway patrolman named Alvin Lay Misseldine. She liked his smile. He was a tease, however, and on their next meeting, he was dressed in the uniform of an Idaho State Game Warden. When Betty Jane questioned that, Alvin replied that the highway patrolman was his twin brother! In reality, he had quickly changed jobs after giving the mayor of Teton City a speeding ticket. Alvin wouldn't back down and change the ticket, so he drove to Boise, and began his career in the Idaho State Fish and Game. Betty Jane and Alvin were married in the Idaho Falls Temple in Idaho Falls, Idaho, on May 11, 1949. Alvin preferred to call his wife Jane. Therefore, Betty Jane was Aunt Betty and sister Betty to all the Hanks family and became Aunt Betty Jane and Jane to all the Misseldines. Once she was a grandmother, she was our beloved Grandma Jane or Granny. Betty Jane and Alvin had four children: Karma Lynn, Kedra Lee, Phillip Alvin, and Anthony Hanks Misseldine. Betty Jane was a devoted mother. She was a faithful member of the Church of Jesus Christ of Latter-day Saints. She truly lived her religion every day and was known for her service to her family and to others. Faith and family were the center points of her life. As Alvin's career changed and moved forward in the Federal Fish and Wildlife Service in law enforcement, the family moved a great deal between Idaho, California, and Oregon. As his career advanced, Alvin had to entertain out of town visitors who came to Portland, Oregon, on business. Betty Jane was outwardly composed but inwardly shy and hated that aspect of supporting Alvin, but she did it and did it well. She was determined to face challenges and deal with them. As Alvin once commented, "You can always count on Jane. If you ask her to do something, she will do it and do it very well."  Betty Jane was fun and funny and stubborn. She was the perfect blend of sugar and spice. She became a wonderful grandmother and great-grandmother to her 17 grandchildren and 32 great grandchildren. In her last few years, Betty Jane struggled with her hearing and memory loss. It was a great trial to her. While we will miss her greatly, we rejoice in her freedom from life's cares and pains and her joyous reunions with all those family members and friends who passed on before her. She was preceded in death by her father and mother, David and Emma Hanks, her sister Davida, and her brothers Wright, Lincoln, Clair, and David, her husband Alvin, and one great grandchild, Andrew Patterson. She is survived by her sister Louise Goynert and brother Phillip (Dawn) Hanks, her sisters-in-law Elen and Carolyn Hanks, Lawan Hanks, Joyce Hanks Jensen, and her four children: Karma (John) Wright of Stansbury Park, Utah, Kedra (Craig) Patterson of West Linn, Oregon, Phillip (Carin) Misseldine of Jacksonville, Arkansas, and Anthony (Wendy) Misseldine of Gilbert, Arizona; 17 grandchildren and 31 great grandchildren. Betty Jane Hanks Misseldine will be interred next to her husband Alvin at Willamette National Cemetery in Portland, Oregon. Due to COVID-19 restrictions, attendance at the graveside service will be limited to invited family members. The service will be available as a zoom meeting for all others wishing to participate. Join Zoom Meeting https://us02web.zoom.us/j/7425398124?pwd=dWJtMmJqc2lPTjlqY1hmSC9CTHlRZz09 Meeting ID: 742 539 8124 Passcode: P0D1c9 One tap mobile 12532158782,,7425398124# US (Tacoma) 13462487799,,7425398124# US (Houston) Dial by your location         1 253 215 8782 US (Tacoma)         1 346 248 7799 US (Houston)         1 669 900 6833 US (San Jose)         1 301 715 8592 US (Washington D.C)         1 312 626 6799 US (Chicago)         1 929 205 6099 US (New York) Meeting ID: 742 539 8124 Find your local number: https://us02web.zoom.us/u/kXazrXHw

The family of Betty Jane Misseldine created this Life Tributes page to make it easy to share your memories.

Send flowers to the Misseldine family.