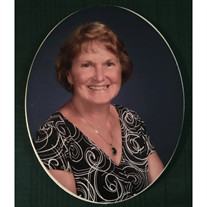 Betty Louise Blue Betty Louise Blue, age 75 was born on May 9, 1940 in Beach, ND.  On March 13, 2016 she passed away in her beautiful home. She was the daughter of George and Victoria (Zielinski) Lardy. Betty graduated Sentinel Butte High School in May of 1958.  On June 11, 1958,  Betty married Daniel Theodore Blue of Beach, ND at Saint Michael's Catholic Church in Sentinel Butte, ND.  The couple settled in Beach, ND where they had two children Maria and Les.  Maria passed away in 1961.  In 1964, the family moved to Livingston, MT where they had two additional children (Tracey and Sheri).  In 1971, they moved to Portland, OR and then to Milwaukie, OR with their three children (Les, Tracey and Sheri) where they have lived ever since. Betty stayed home with the children and volunteered with the school district and at church.  She loved spending time with children and began working full time for North Clackamas school district where she worked almost 25 years.  She retired in 2005 at age 65. Betty and Dan were married almost 58 years.  Betty was a wonderful Mother and devoted Wife.  She loved her family and had strong faith in the Catholic Church.  Her values were high and she believed in tradition.  She enjoyed spending time in her yard.  She loved flowers, square dancing, was a great cook, liked learning and creating new things.  Her favorite color was pink.  She was adventurous and enjoyed traveling.   She was generous, loving and kind to everyone. Betty is survived by her husband Dan; her sister Donna Latka of Townsend, MT; her three children Les Blue of Milwaukie, OR, Tracey Blue of Portland, OR, Sheri Blue of Denver, CO and her grandchild Mark Blue of Boise, ID. A funeral mass will be on Saturday, March 19, 2016 at 11:00AM at Christ the King Catholic Church in Milwaukie.  The Recitation of the Rosary will come before the Mass at 10:30AM.  Committal service to follow at St. John the Apostle Catholic Cemetery.

Betty Louise Blue Betty Louise Blue, age 75 was born on May 9, 1940 in Beach, ND.  On March 13, 2016 she passed away in her beautiful home. She was the daughter of George and Victoria (Zielinski) Lardy. Betty graduated Sentinel Butte High... View Obituary & Service Information

The family of Betty Louise Blue created this Life Tributes page to make it easy to share your memories.

Send flowers to the Blue family.