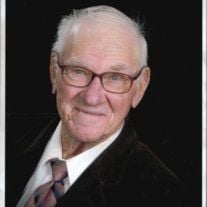 Benjamin (Bennie) Fred WiedrichDecember 12, 1925 - October 2, 2013Ben Wiedrich was born and raised on a farm north of Beulah, North Dakota, the oldest of 12 children. He worked the farm until he spent several winters working in a silver mine in Wallace, Idaho. He married Irene Flemmer on September 14, 1947 in Zap, North Dakota. They had 5 children. After his son, DuWayne, was born in Wallace, Ben moved his little family to Pick City, North Dakota to work on the construction of the Garrison Dam. While back in North Dakota, three daughters were born: Geraldine (Geri), LaVonne and Eileen. In April 1955, Ben moved his family to Oregon. After working in construction for a short time, he began his career as a cement mason. Their youngest, Janet was born in Oregon. Ben lived in Portland until moving to Oregon City in 1970. His 31 year career culminated in being Co-owner of Flatco Concrete. He retired in 1986. He spent much of his retirement years fishing, wintering in Arizona, and pitching horseshoes. He is a member of the Oregon Horseshoe Hall of Fame, holding the record for most consecutive State titles (15) and most titles overall (19). In 1981, he pitched in the World Horseshoe Tournament, held in Minnesota, where he placed 10th with a 78% ringer average. His proudest moment of that tournament was defeating the World Champion Walt Ray "Deadeye" Williams in an extremely close game. After losing Irene to cancer, Ben married Cleo Herndon in 1996. They spent their golden years together wintering in Arizona and enjoying their blended families. Ben spent his summers in Oregon fishing on the rivers nearby their home in Gladstone and also traveling to North Dakota. Winters were spent with Cleo in Arizona enjoying the warmth and the company of wonderful friends. Ben is survived by his 5 children: DuWayne Michael (married to Norma); Geraldine Marie Keeler (married to George); LaVonne Irene Priester; Eileen Donna; and Janet Kay Estoup (married to Michael). He leaves behind 8 grandchildren and three great grandchildren. He is preceded in death by 5 of his siblings. We would like to invite you to a celebration service of Ben's life Friday October 25th at 11 am at Zion Lutheran Church 720 Jefferson St Oregon City, Oregon 97045. After the service a luncheon will be served and then a gathering will take place at Mountain View Cemetery in Oregon City. In lieu of flowers, the family asks that you make a donation in Ben's name to Zion Lutheran Church where Ben has been a member for 58 years. He cherished the Zion congregation and raised his children there. The family would also like to thank Doctor Rodney Connor for his wonderful care he gave to Ben for over 20 years and Rosie, the nurse from Legacy Hospice for the loving and compassionate care she gave Ben in the last weeks of his life. The people who work for Hospice are truly angels on earth and Rosie held a special place in Ben's heart and will forever hold a special place in ours."I have fought the good fight, I have finished the race, and I have kept the faith. Now there is in store for me the crown of righteousness". 2 Timothy 4:7-8a.

Benjamin (Bennie) Fred WiedrichDecember 12, 1925 - October 2, 2013Ben Wiedrich was born and raised on a farm north of Beulah, North Dakota, the oldest of 12 children. He worked the farm until he spent several winters working in a silver mine... View Obituary & Service Information

The family of Benjamin Fred Wiedrich created this Life Tributes page to make it easy to share your memories.

Send flowers to the Wiedrich family.