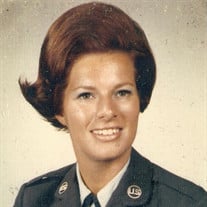 Anna Louise Bruns Anna was born Saturday April 2, 1949 in Portland Oregon. She was the first born of Edward and Shirley Bruns. She attended grade school and high school in both Oregon and Washington. She was the big sister to two brothers and two sisters. Being the oldest meant helping Mom take care of the rest of us. When she got tired of tying our shoes, she taught us how to tie them. When we got bee stings, she was there to pull out the stinger, and apply the iodine. As we got older, she was generous with her time to help us with our homework. Sometimes she would even let her younger sister wear her clothes — including her Beatle Boots. Early on, one of the jobs she had was a long-distance telephone operator. Sometimes she would call me up with her 'operator' voice and prank me into thinking I had a phone call. Then Uncle Ken came into the picture. Uncle Ken was a retired Air Force Lt. Colonel and he convinced her to join the service —Air Force of course. She enlisted in 1971. She worked her way up to being one of the few female air traffic controllers in the Air Force. She was the first female to be able to do ground approach radar right out of tech school. She was eventually rated as able to perform as a controller in complex or high density facilities. She served in Korea and the Philippines. Later in her career, she phased into a less stressful job and assisted the squadron Commander in managing squadron activities and had general supervision over enlisted personnel. She retired in 1991 at Nellis Air Force base in Nevada with the rank of Master Sergeant. While she was in the service she married Larry Paine. Sadly, after years of marriage, it ended in divorce. She never married again. I encouraged her to write a book about her experiences in the Air Force and unfortunately she never did. There were many interesting stories. The Air Force sends personnel to places on whatever plane is available. Lots of times while being transported, Ann was the only woman on the plane. When the pilots heard there was a woman onboard, they would usually invite her up to the cockpit. One time she was on a flight that was doing mid-air refueling. The crew asked if she would like to do the refueling, she said "sure". So they suited her up and instructed her through the process. She got the job done without a hitch. Another incident happened when she was in Korea. The family was worried because we hadn’t heard from her in a while. Uncle Ken sprang into action. He knew how to get a phone call through from Portland Oregon to our sister sitting in a control tower in Korea. She picked up the phone and was absolutely aghast to hear his voice. She told him: "You can't call me here!" He told her we were worried. She said she would call him when she got home and hung up fast. After that she kept those cards and letters coming regularly. Anna loved old movies and John Wayne. She had every one of his movies. She loved coffee and woe to you if you spoke to her before she had her morning cup. She loved collecting recipes, which didn't always translate into them being made. She loved to drive. After she retired from the service, she became a driver instructor for awhile. Anna also was a driver for the Tri-Met lift bus for handicap people. My sister had a wonderful sense of humor and at times we laughed so hard we could barely breathe. Brother Dennis and her were room mates for over 15 years. Dennis jokingly would say that living with her sometimes felt like he was in the military. She wanted him to use military time, but he balked at that. Anna was baptized in the name of the Father, Son, and Holy Spirit on July 3, 1994. She believed in Jesus Christ as her savior. Since she believed in Jesus we know she is in heaven. We love our sister and will miss her very much and because of our belief in Jesus we know we will see her again. Anna is survived by her mother, Birttia (Shirley) Bruns, her brother Dennis Bruns, her sister Nancy Hall, her brother David Bruns, her sister Linda Shook and husband Ellis. She is also survived by her great uncle Jesse Bemis. Anna's headstone will be inscribed with the words: "Proud to Serve". She was proud to serve her country. Rest in peace Anna.

Anna Louise Bruns Anna was born Saturday April 2, 1949 in Portland Oregon. She was the first born of Edward and Shirley Bruns. She attended grade school and high school in both Oregon and Washington. She was the big sister to two brothers and... View Obituary & Service Information

The family of Anna Louise Bruns created this Life Tributes page to make it easy to share your memories.

Send flowers to the Bruns family.