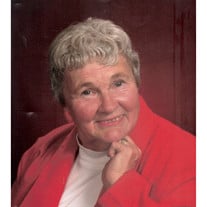 Anita Marie Miles (nee Adams) was born on March 29, 1937 in Palmer, Nebraska to Orville and Bessie Adams. Anita passed peacefully on January 19, 2022 at her Oregon City, Oregon home surrounded by her family. She was 84 years old. As a small... View Obituary & Service Information

The family of Anita Marie Miles created this Life Tributes page to make it easy to share your memories.

Send flowers to the Miles family.