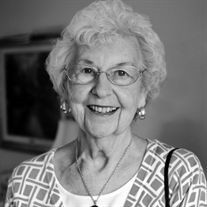 Alverna Naomi (Lindau) Johnson relocated to heaven on September 8, 2014, six days short of her 85th birthday, after battling pancreatic cancer. She was born on September 14, 1929 in Oregon City, Oregon to the late Rosa (Schaarschmidt) and Benjamin Lindau. After graduating from Oregon City High School in 1948, she worked for 12 years as a sales clerk for Cochran's Department Store where she eventually met the love of her life, the late Richard (Dick) Johnson. They were married on February 20, 1959 and lived their entire married life in Gladstone, Oregon. Alverna continued to live in her home until the last two weeks of her life on this earth at which time she moved to Ivy Court Senior Living in Milwaukie, Oregon where she passed into glory.She is survived by her daughter, Rhonda Cullens, son-in-law, Chane Cullens, and grandsons Cody and Chad Cullens of Sandy Hook, Connecticut. She is also survived by her sister, Carleen Reilley, brother-in-law, Dale Reilley, and many nieces and nephews. She dearly loved her family and many friends and loved to give of herself in so many ways including taking meals to others and sending out many cards and letters of encouragement. She also enjoyed sewing, gardening, baking, birds, anything red, and finding a bargain. Stretching a dollar came very naturally to her and she was usually buying something not for herself, but for someone else.Alverna was also known for her love of her Lord, her tender heart, and her kindness to others. Even during very trying times near the end of her journey in this life, she held fast to her hope and faith in Christ and shared her beautiful, infectious smile with those around her. A celebration of her life will be held at the Gladstone First Baptist Church at 6125 Caldwell Road, Gladstone, Oregon, on Saturday, September 20, 2014 at 10:30AM.

Alverna Naomi (Lindau) Johnson relocated to heaven on September 8, 2014, six days short of her 85th birthday, after battling pancreatic cancer. She was born on September 14, 1929 in Oregon City, Oregon to the late Rosa (Schaarschmidt) and Benjamin... View Obituary & Service Information

The family of Alverna Naomi Johnson created this Life Tributes page to make it easy to share your memories.

Send flowers to the Johnson family.