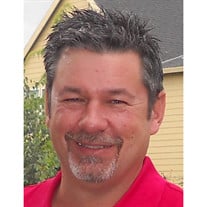 Alan Shearer - Big Al - died unexpectedly and peacefully playing the game he loved and surrounded by his best buddies at Stone Creek Golf Club in Oregon City, OR at the age of 54. Alan is survived by his parents, Wanda & Duane Shearer; his brother, Terry Shearer; his children, Whitney Kivett and Lindsey Shearer; granddaughter Mollie Marie Kivett; and his girlfriend, Diane Lugar. He is preceded in death by his son, Tyler Shearer; his uncle, Herb Winder; his grandma, Sarah Shearer; and his grandparents, Max and Gladys Winder. Alan was born on April 24th, 1963 in Portland, OR to Wanda & Duane Shearer. He graduated from Oregon City High School in 1981 and went on to trade school for 6 years to become an electrician. He was married for 18 years and welcomed two beautiful girls, Whitney Morgan Kivett & Lindsey Allison Shearer, into the world after losing his first-born child, Tyler Alan Shearer. Alan was a dedicated father that put his children first throughout their childhood. He instilled patience, ambition, and a sense of humor into his children and anyone that was involved in his life. Alan surrounded himself with friends and family whenever he could, and he was always the life of the party. He was a humorous individual who loved a good laugh that was contagious to anyone around. He was competitive with those that accepted a challenge, especially on the golf course. Alan was passionate about his Dallas Cowboys, New York Yankees, classic rock bands, and most importantly Van Halen. A funeral service will be at 11:00am on December 14th, Holman-Hankins-Bowker & Waud Funeral Home. A graveside service will be 1:00pm, Mt View Cemetery with a reception to follow at Stone Creek Golf Club at 2:00pm. All are welcome to attend and celebrate Alan's life. The family would like to thank everyone for the support as they deal with this tragic and sudden loss. Al left us too soon.

Alan Shearer - Big Al - died unexpectedly and peacefully playing the game he loved and surrounded by his best buddies at Stone Creek Golf Club in Oregon City, OR at the age of 54. Alan is survived by his parents, Wanda & Duane Shearer; his... View Obituary & Service Information

The family of Alan Duane Shearer created this Life Tributes page to make it easy to share your memories.

Send flowers to the Shearer family.